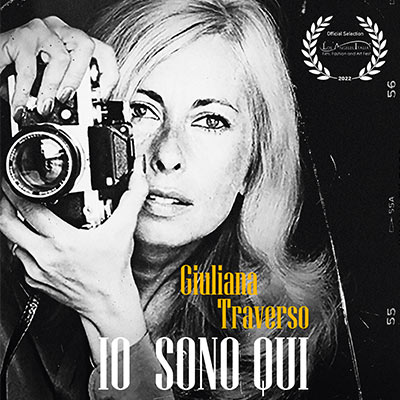 “IO SONO QUI. Giuliana Traverso “is the first short docu-film created and produced by Safiri Film – co-directed by Samuele Mancini and Matteo Garzi – with the collaboration of Orietta Bay, which has allowed the use of images from the Photographic Archive of Giuliana Traverso and the MuMa Musei del Mare e delle Migrazioni in Genoa.The short film distributed by Francesco Bruschettini (Kahuna Film, an independent production company based in Tuscany) was selected at the Los Angeles Italian Fashion Film Festival 2022, to be held at the TCL Chinese Theater , on glittering Hollywood Boulevard in Los Angeles, March 20-26.

Giuliana Traverso has dealt with all the great themes of modern photography, reportage, portraits, social commitment, the nude, the real, the abstract, thematic research, discovering the fragility, the drama, the comedy, the scenography that they are composed and enclosed in things, in everyday life, in the chosen subjects.

With the “Woman Photographer” course created in 1968 she gave a substantial boost to female creativity, training many skilled photographers over the years. The course has had an extraordinary success: since 1979 it has also been established in Milan for twenty-five years and is still a milestone and an island in its own right in the now vast panorama of the many training courses related to photography.